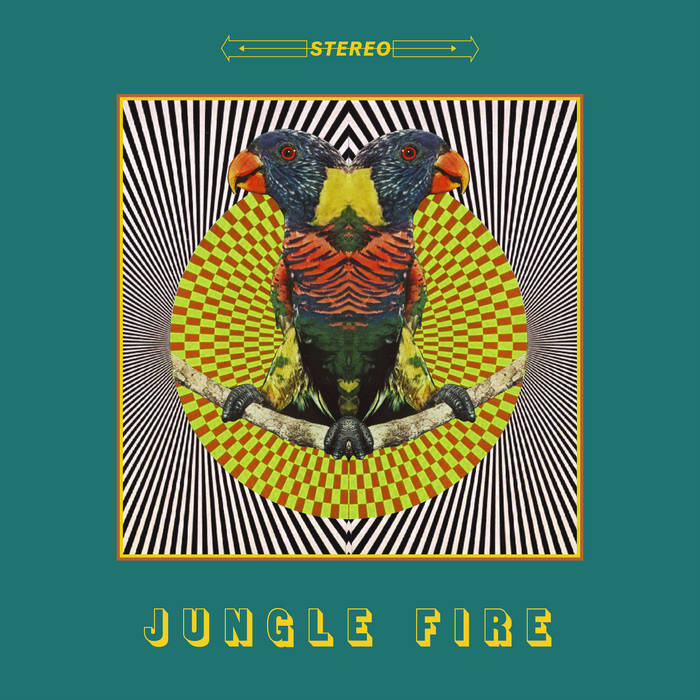 From the band themselves:

“Our thing is incorporating rhythms from a wide variety of African Diaspora sources. This album in particular is darker than the previous two.”

“TropiFunk from Los Angeles” TropiFunk is an actual sub-genre we have been building and practically trademarking over the past 9 years and we feel it rings true to what our music and vibe is.”

“The album opens with “Quémalo”, a fuzzed out and psychedelic Pilón (the Cuban musical genre, not the coffee brand) inspired ode to the great Cuban Funk master himself, Juan Pablo Torres. As the name implies, it is a burner meant to clear the way for new and funky forms of musical expression.”

“The second track, “Pico Union” is inspired by the neighborhood where Jungle Fire rehearses and creates their music. With its swirling guitar lines straddling the lines between Peruvian Chicha and experimental video games, heavy drum feel and floating bass lines, the tune pays homage to several of the cultures which share space just a mile south of where Fela Kuti and Sandra Izsadore met in 1969.”

“‘Biri Biri’, which in part takes its meaning from the Yorubá phrase meaning “that which spreads”, is a happy union between a bouncy Afrobeat-esque rhythm with synth and dub flavoring that has proven to be a stimulating force in the dance floor for the band’s most recent performances in California.”

“‘Masa’ takes its name partly from the band’s love of Southern Mexican tamales, a staple of many establishments in Pico Union, and is dedicated to a Japanese masa loving audio engineer friend of the band, Masa Tsuzuki. Much like the nature of the food that inspired its creation, “Masa” is a tasty offering of Pilón, Cumbia and Funk dough wrapped in psychedelia, polyrhythms and strong horn melodies.”

“For listeners who purchase the vinyl version of the Album, expertly mastered by JJ Golden of Golden Mastering, Side B begins with the moody call to action titled “Emboscada” (Spanish for “Ambush”). Like its name implies, it is sure to surprise the listener with cinematic rhythmic twists and turns, as if Black Sabbath’s Bill Ward and Latin Funk legend Ray Barretto were sharing a groove comfortable to both.”

“‘Smash & Grab’ is a blistering mash up of sped-up Boogaloo, West African inspired rhythm guitar lines, slowed down Drum ‘n Bass and jaw shattering horn lines, setting up the tension/release with “OscilLAdope”, which marks the only time Jungle Fire has incorporated a non-live instrument (a filtered synth sequence) into its music. This tune spawned a whole EP of synth inspired explorations to be released at a later date.”

“The Afro Disco and Psych Rock sounds of “Atómico” are a nod to the dance floor burners of Jungle Fire’s debut LP and have proven to be a great set closer and/or encore during the band’s most recent club performances.”

“The album’s closing track “Consider This” pays homage to Rod Serling and came about during a musical exploration inspired by the copious amounts of DVDs labeled “Consider This” circulating the City of Angels at the end of 2018 while the band was immersed in its first group venture into film scoring. It is a likely approximation to what would happen if they would ever score an episode of the legendary TV show, Twilight Zone.”

JUNGLE FIRE digs deep into afro/latin funk with an approach that is both authentic and highly explosive!

"I Love It"- Gilles Peterson

"I've got to say your music is absolutely amazing. It's the perfect cross between Afro Cuban and Afro Beat."
-Snowboy UK

Bandcamp Daily  your guide to the world of Bandcamp

Featuring Oakland sounds from the Smart Bomb collective and Samplelov.